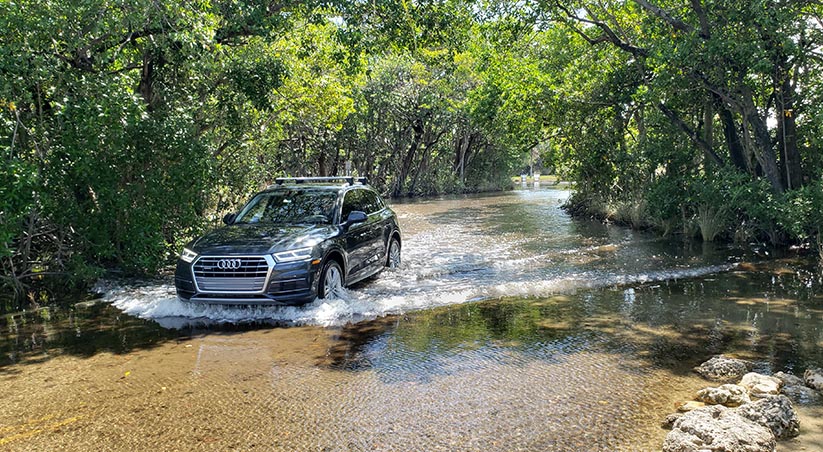 The latest issue of Marina World magazine – featuring an article published by Jannek Cederberg – focuses on disaster management and provides solutions to how marinas and coastal structures around the world are defending themselves from threats such as climate change, sea level rise, and tidal flooding. In this issue, Jannek explains the Cummins Cederberg approach in “Managing the threat of sea level rise at historic waterfront park,” highlighting a recent flood mitigation roadmap completed for Miami-Dade County Parks. You can read the online version of the article here.

Matheson Hammock Park is the first County Park in Miami, located along the western shoreline of Biscayne Bay, Florida. The park opened in 1930 with the goal to ‘preserve the wild and natural beauty’, and covers 630 acres (255ha) featuring trails through mangroves, a manmade lagoon flushed naturally by the tide, a beach, marina and boat launch. It is also a popular spot for kiteboarding, kayak and paddleboard rentals.

Most of the park is relatively low lying, which results in flooding to some areas during high tide events. In addition to the negative impact on visitor experience, flooding has financial impacts, as revenue generating components are impacted operationally and physically. If roads and parking lots are flooded, it will deter people from visiting even on days with no flooding. The park also includes the only waterfront restaurant in Coral Gables, which is often used for events and weddings due to its picturesque outlook on the beach and bay. Unfortunately, it is surrounded by low lying areas so the tidal calendar needs to be checked before planning an event.

As impacts from flood related issues started receiving more attention, Miami-Dade County Parks relied on Cummins Cederberg, a leading South Florida based coastal and marine engineering firm, to recommend solutions. A study of the conditions was conducted relative to developing flood mitigation concepts and a long-term roadmap to limit impacts of sea level rise. This study was unique, as it combined sea level rise projections, practical concepts and on-the-ground implementation experience with maintenance and replacement requirements relative to overall service life. In this way, a clear roadmap was developed for Miami-Dade County relative to further planning infrastructure improvements in the park until 2100. 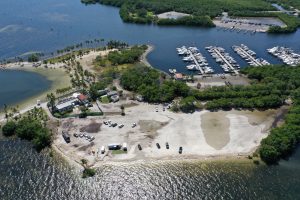 Roadmap to flood mitigation
Incorporating flood mitigation measures can be costly if performed in an untimely manner or on an emergency basis. Cummins Cederberg suggested that the additional cost of adapting to sea level rise could be significantly reduced if it was incorporated incrementally into periodic maintenance or capital improvement events. Many components of the park are interrelated but might be earmarked for upgrades individually, which makes considering future improvements of related elements important. For this to occur, proper planning of improvements relative to water levels is required.

An assessment of existing infrastructure and environmental resources was conducted in order to understand and document current conditions. The condition of the existing infrastructure is important so as to determine remaining service life and potential repair options, as well as the feasibility for adaption relative to increased water levels. The park is within a pristine natural area, surrounded by environmental resources including a mangrove forest and seagrass beds, which may provide constraints relative to potential flood mitigation concepts.

Tidal values and sea level rise
Tidal values are average values and are exceeded on a frequent basis. The predictions of tidal water levels show a periodically seasonal high-water level during a certain time of the year, popularly referred to as ‘king tides’. King tides cause flooding in inland low-lying areas or when heavy rainfall events occur, as the drainage efficiency is decreased due to the elevated water levels.

An evaluation of typical and extreme tidal water levels was conducted to understand peak tidal levels and exceedance probability. The local tidal range is approximately 2.0 to 2.5 feet (61 to 76cm), depending on the time of the year. In addition to variations in the tidal levels, there is also variation between the predicted and the observed water level values because of wind, temperature, pressure and other factors, which can result in differences of up to 1.5 feet (46cm) at the project area.

The adopted sea level rise projections forecast an increase of 1.2 feet (36.5cm) by 2050 and 4.4 feet (134cm) in 2100 as compared to now. In 2050, most of the park would be flooded frequently, and by 2100, the entire park would be flooded the majority of the time. One of the uncertainties in analyzing the historic sea level rise is the annual rate of sea level rise, which appears to be increasing. However, this increase is a more recent phenomenon, so it is difficult to confidently predict the trend of this acceleration. Nevertheless, for planning purposes, it is preferable to overestimate rather than underestimate, as the latter may make future adaption more difficult or costly.

To further evaluate areas of flooding, a flood inundation analysis was performed to determine what areas are flooded at various increasing water levels, as well as the sequence of the flooding to identify critical areas that serve as access for other areas of the park. Topographic LiDAR data was compiled and processed in order to develop a detailed three-dimensional contour map of the project area.

The flood inundation modelling showed, over time, new areas of the park will be inundated if improvements are not implemented. Under 2017 conditions, a low-lying access trail through the mangroves and the beach area along with most parking areas are submerged following just a small increase in water level, but other areas are not affected. Over the years, new areas of the park were shown to be inundated using the model. By 2100, the model found the entire park will be flooded except for a small portion of the marina parking area due to regular Mean Higher High Water (MHHW) conditions, and during extreme tide conditions the entire park will be completely flooded. 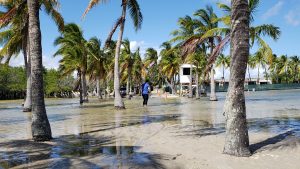 The implementation schedule provides information relative to when replacement of a component is required based on the service, and the recommended design elevation at each replacement stage. This allows for planning individual components relative to each other, as it provides recommended elevations for adjacent components so proper transition can be planned. It also clearly depicts when new projects should be implemented so financial budgets can be prepared accordingly.

Resilient infrastructure
Cummins Cederberg recognized high tides and sea level rise becoming a real threat for this historic coastal park. If improvements were not implemented, parts of the park or even the entire park would likely be unusable during a large portion of the year within the next 20 years. Today, Miami-Dade County is in the beginning phases of Cummins Cederberg’s recommended implementation schedule starting with upgrades to their parking lot. The implementation schedule will be updated periodically, as new information on sea level rise is published, as well as when projects are implemented. This study proved with the proper planning and implementation scheduling combined with routine maintenance on infrastructure projects, we can build cost-effective resilient futures, just like Matheson Hammock Park.

Cummins Cederberg is one of southeast Florida’s largest professional engineering firms uniquely specializing in the coastal and marine environment. It was founded by Jason Cummins and Jannek Cederberg and has steadily grown to become a full service practice including coastal engineering, marine engineering, environmental permitting, and biological monitoring.