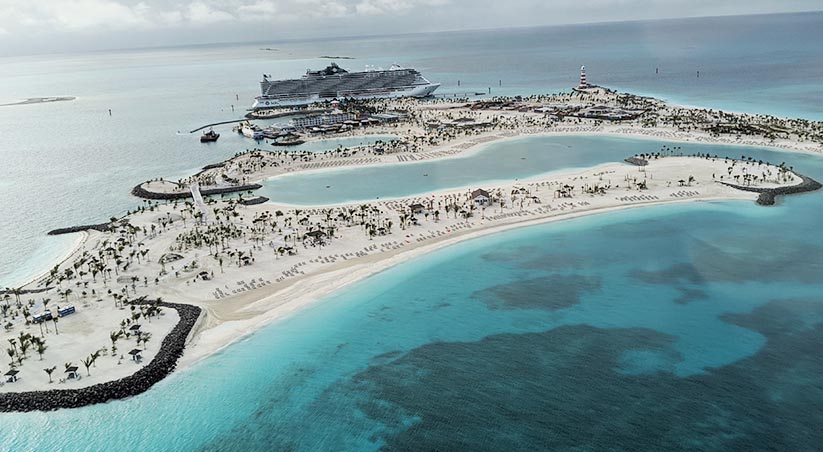 Ocean Cay is MSC Cruises newest private destination island in The Bahamas. It is also one of Cummins Cederberg’s largest and longest running projects to date.

Topographic and bathymetric surveying were performed along with rectified aerials. Due to the remote location, existing information was limited and thus many items, such as control points and water levels, were established. A long-term tidal study was performed to determine tidal levels, which is critical when determining dredge and storm surge elevations. A marine resource survey was conducted to map marine resources, such as seagrass and corals, which could potentially be impacted by the construction. An EIA was prepared and approved by the BEST commission.

Detailed hurricane and wave modeling were conducted utilizing the advanced MIKE21 software to determine extreme wave and storm surge conditions. A flood map with minimum finished floor elevations was prepared for use by the design team.

A detailed sediment transport study was performed for subsequent use in the beach design. Nearly two miles of beach was created along the island perimeter and within two interior lagoons. Water circulation modeling was performed to ensure a high rate of water exchange in the lagoons.

2 miles of pristine beaches were created with varying waterfront experiences. Shoreline stabilization was designed along critical areas of the island perimeter to ensure stability during extreme hurricane conditions. The shoreline stabilization included placement of 100,000 tons of rock, including areas near water depths up to 60 feet. Expansion of the island through reclamation and excavation was designed involving almost 1 million cubic yards of earthwork. Design conditions including water levels and wave loads during extreme conditions were determined for marine structures.