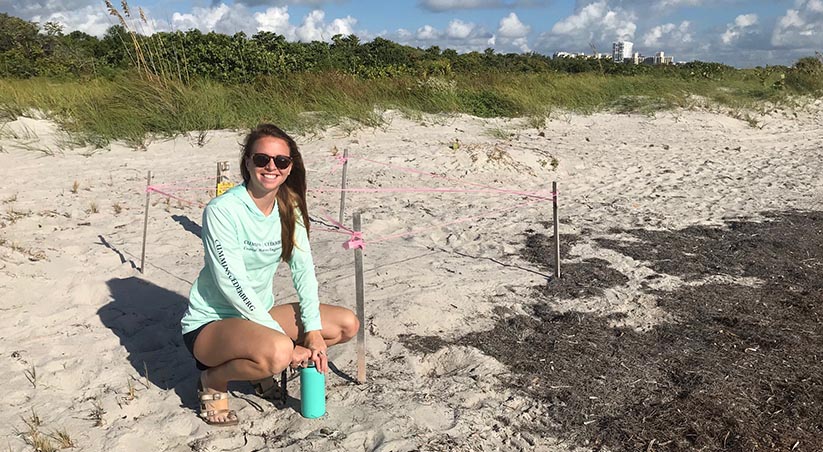 Sea Turtle nesting season is well underway throughout the Florida coast, Juno Beach is already home to 76+ nests, a significant increase from years prior. Sea turtle nesting season occurs every summer in South Florida, with most nests laid during May and October. After 2-3 months of incubation, 100+ hatchlings per nest will make their way to the ocean by moonlight. Between Miami-Dade, Broward, and Palm Beach County, over 46,000 nests were laid in 2019!

South Florida provides nesting habitat to three species of turtles: Loggerhead, Green Sea, and Leatherback. Loggerheads are the most common, making up approximately two-thirds of all nests in South Florida. They are named for their exceptionally large head with strong jaws, used to crush their dinner of choice: shellfish. Green Sea Turtles are the second most common species, and unlike their Loggerhead friends, they prefer to eat seagrass and algae. Leatherbacks are the rarest species, making up approximately 1% of all nests. Leatherbacks are the largest and oldest of all turtles, weighing up to a whopping 2,000 pounds and existing for the last 150 million years back to the time of the dinosaurs! All three species are listed as either vulnerable, threatened, or endangered by federal and international organizations, primarily due to habitat loss, human disturbance, or fishing.

To help protect sea turtles, there are several simple actions you can take:

From adopting a nest at Bill Baggs State Park, to designing and permitting our beach projects with Sea Turtle Construction Conditions in mind, Cummins Cederberg is committed to protecting sea turtles for future generations. Working together, we can all help to protect sea turtles and keep them coming back to Florida’s beaches to nest year after year!